Data collected from 12 countries worldwide revealed a staggering £12,600 pay gap between the salaries of men and women

International networking group Global Women in PR (GWPR) revealed at the ICCO Global Summit 2016 the results from their first gender pay gap survey of men and women working in the Global PR industry. On top of the £12,600 pay gap, the survey also provided an important insight into work-life balance and working practices that might provide a clue as to why more women are not better represented at the top of a profession where they make up the majority of the workforce. 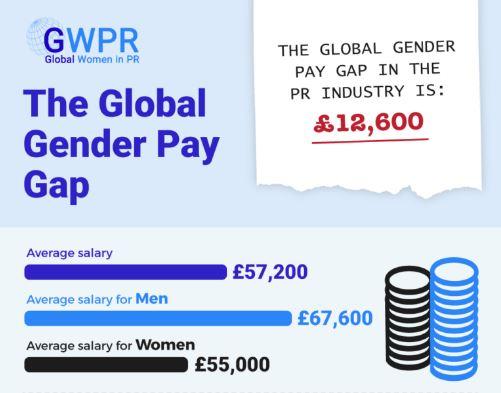 The survey, conducted by leading research company OnePoll on behalf of GWPR, revealed an average global PR salary of £57,200, with men earning on average 19% more at £67,600 compared to women at £55,000. Whilst salaries are very similar at a junior level in PR; when it comes to more senior roles it is a very different picture. For example, a male in-house Board PR Director earns an average salary of £110,000, compared to his female equivalent on £97,000 – a £13,000 pay gap. The survey also showed that more than a third of men (36%) working in PR agencies are at board director level, compared to only 16% of women who have broken through the glass ceiling.

When considering asking for a promotion or pay rise, 21% of men were very confident in doing so, unlike women (10%). Further gender differences surrounded balancing childcare and work commitments. This was described as more challenging by women (78%) than men (58%). The sharing of domestic chores was fairly evenly split with 47% claiming to divide the chores, although 41% of the women surveyed believed they did more than half!

In today’s connected, world one of the most surprising facts to emerge was the lack of opportunity to work from home. 70% were not allowed to work from home on a weekly basis, with 15% never allowed to do this. The average working week for a PR professional is 45 hours and an encouraging two-thirds believe they have a good work-life balance.

Commenting on the survey findings, Alice Weightman, CEO and founder of executive search firm, Hanson Search, said “If we want to tackle these issues – the gender imbalance at the executive level and the gender pay gap – then we need to look beyond the role of women alone. We need to look at the role of men and fathers as well. We - as employees, as businesses, as colleagues - must remove the stigma against men who request flexible working and shared parental leave. It’s just one small step, but it’s a necessary one if we want to achieve gender equality in the higher ranks of businesses.”

GWPR co-founders Angela Oakes and Susan Hardwick commented: “The findings revealed a much higher pay gap than perhaps anticipated and considering the world in which we now operate, with 24hour access to technology, it is hard to see why there cannot be more flexibility in the workplace.

“Flexibility is important, but so too is looking at the skill sets that women need to help them reach the top. Business training and tackling confidence issues are two key areas worthy of attention. Retaining talented women so that the boardroom has a better gender balance makes sound business sense. As many studies have shown – a balanced boardroom improves business performance.”

Francis Ingham, Director General of the PRCA and CEO of ICCO announced an important initiative last month that includes gender pay gap reporting in its kitemark accreditation for UK consultancies for the first time – this should be a global initiative.

*Hanson Search is a strong supporter of gender balance across industries. As well as supporting this GWPR initiative at the 2016 ICCO Global Summit, they commissioned a 2013 study on gender balance in communications and sponsored the IPA's 2016 Women of Tomorrow Awards. CEO Alice Weightman runs a podcast highlighting the careers of successful women in the industry, 'Inspiring Stories.'

How can we help?

We build relationships to support your business and career aspirations. Whether you’re looking for a new opportunity, career advice, or strategies for negotiating a pay rise, our expert recruitment consultants can help you along the way. Contact us for a confidential discussion.